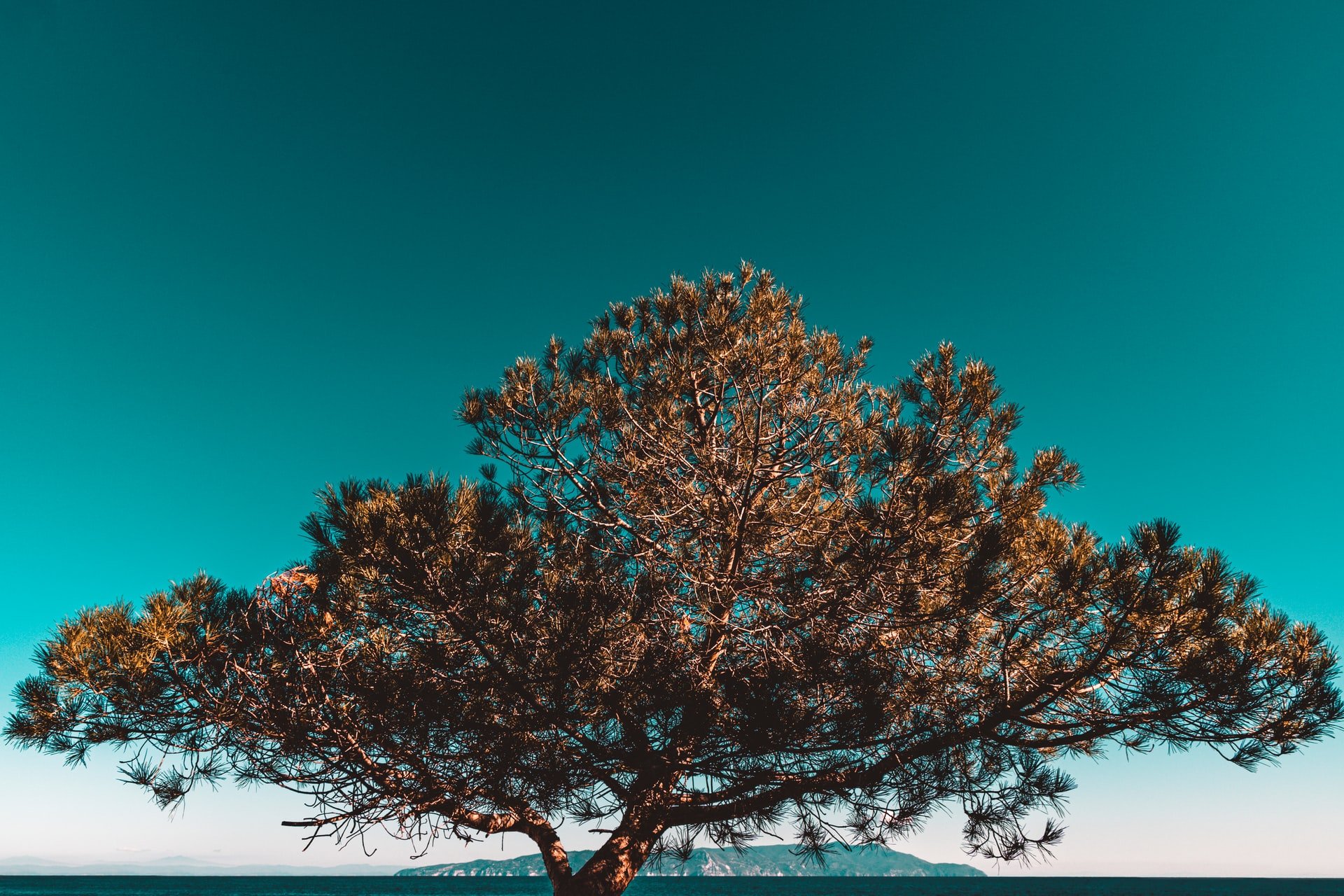 I was an economics major in college, which means I heard the terms “rational consumer” and “opportunity cost” a lot.

The former was pretty clearly a joke – a cursory glance reveals that few people behave rationally as defined by the whiteboard and dry erase marker crowd. If they did, sales of compressed carbon (diamonds) and dead vegetation (flowers) wouldn’t spike each year around February 14th.

In my senior year, I witnessed real opportunity costs for the first time when applying for jobs. I could attempt to go in many directions, but choosing one would mean sacrificing the others – at least for now.

I didn’t know it then, but the possibility tree was branching out in front of me. There were dozens of directions and sub-directions my life could take.

At the trunk, the branches aren’t far apart, and switching is easy.

As you go from sturdy trunk to large branch to narrower limb, your switching cost increases. Choosing a branch becomes stressful stuff.

Most of us stare up at the gnarled, convoluted branches of our personal Whomping Willows, gulp down our fears, and grab for whatever limb seems interesting and reachable.

Thankfully, we can do better. The process can be far less intimidating with some critical decisions in advance and a bit of maintenance. We can remove dangerous or low-value branches, encourage positive future growth, and reduce decision fatigue.

In other words, we can prune our possibility trees.

Getting OK with cutting down

Most of us don’t like the idea of removing branches from the possibility tree. Since childhood, we’ve been taught that eliminating options is a cardinal sin.

Most of our behavior in our teens and twenties – working hard in school, padding our resumes with extracurricular activities, and snagging prestigious jobs – are in service of cultivating the fullest, leafiest tree we possibly can.

Now, instead of using or admiring all those beautiful limbs, we need to…chop them off?!

In short, yes. If we want to spend our lives admiring a beautiful tree of tantalizing options, we should never pick up our pruning shears. Alas, the possibility tree is for climbing, so prune we must.

The process won’t suck as much as you think. Yes, it’s tough to watch some beautiful branches fall to the ground, but your tree will be stronger for it.

There are three types of branches you’ll want to remove from your possibility tree. We’ll go through them in turn.

#1: Branches with the risk of ruin

There are some bad news branches on every tree. They look OK from afar, but the minute you put weight on them, they’ll start to crack.

These hollow branches may not fall right away. You might be able to scramble to safety before they do, but hanging out on them is a bad idea. “This branch will probably fall at some point, but it hasn’t fallen yet!” is not a high-quality life strategy.

This lesson in tree-climbing seems obvious. But as I look around at my friends and colleagues, too many spend significant time on the brittle, unstable branches.

These are what author Richard Meadows calls “Bottomless Pits of Doom” – the negative asymmetries that can wipe us out physically or financially.

A few examples of bottomless pits:

These points might be bummers, but they shouldn’t be controversial. I don’t anticipate anyone emailing me to suggest cocaine is good for you and that the only reason we can’t sprinkle it on our corn flakes is a clandestine partnership between the anti-drug lobby and Big Cereal. If you do have a take like that, my inbox is open.

But there’s another class of decisions that, while the payoffs and penalties aren’t as immediate, may have just as much to say about the quality of your long-term future. These are the trickier ones.

I used to play youth baseball on a terrible field. Any baseball field has idiosyncrasies, but this one was all idiosyncrasies. There were large rocks in the infield. The outfield “grass” was clumpy in most places and nonexistent in others.

But the biggest issue is that there were ankle-deep holes all over the field. I saw a rabbit in one once – an actual rabbit hole!

The holes seemed to come out of nowhere. You’d be running after a fly ball and thud. Down you go.

Over time, my teammates and I developed the ability to watch the ball and scan for holes simultaneously.

The skill of proactively scanning for rabbit holes is one we all need to hone as we prune our second type of branch – the alluring branch that gets less stable as you go along.

Here’s a fun exercise to explain what I mean. Have you ever:

These wake-up call moments are jarring because they seem to come out of nowhere.

They don’t, but they do happen in a gradual process that often escapes our notice. You don’t skip from “I never get drunk” to “I get drunk every time I leave the house.” The choices that lead to problem behaviors are incremental.

Early on, risk accumulates under the surface, mostly invisible. Once it becomes visible, it’s already too late; your behaviors no longer seem like choices.

They are choices, but the critical decisions were made long before the consequences arrived.

That’s why it’s important to spot these decisions and make them on your terms. Choose well, and you can render one hundred future choices irrelevant. Get it wrong, and you’re going to spend a lot of time climbing out of a rabbit hole of your own making.

If there are relatively few bottomless pits, this class of decision is everywhere: diet, exercise, harmless flirting, minimally addictive substances, and TV watching.

We don’t want to lop off these branches indiscriminately. Most carry some benefit, and the risk of ruin is low if used wisely.

Balancing these competing priorities is the most challenging task in pruning a possibility tree.

Luckily, author Gretchen Rubin has introduced two archetypes that can help us scan for (and proactively avoid) rabbit holes.

As Rubin sees it, the key is to determine whether you’re a moderator or an abstainer.

We may be moderators in some parts of life and abstainers in others. I’m great at having a couple of chips but terrible at having only one beer. I can skip a single workout without issue, but you shouldn’t trust me with a bag of Halloween candy.

More power to you if you have no trouble drinking one beer while your friends imbibe deep into the night. Congratulations on being a moderator! Alcohol can retain its limited place in your life.

The areas in which we should be abstainers are more challenging.

At first, our behavior seems well-controlled. We might eat poorly, but we look good in the mirror. We might engage in some light banter with someone attractive on our subway commutes, but we’re just talking. It’s no big deal.

Unfortunately, the slow creep of eating habits taking a toll on your health or the allure of another person impacting your relationship makes them hard to notice until they’ve gone too far.

So if we hope to avoid the most painful human emotions – regret, shame, and self-loathing – we must make category decisions to stop these behaviors before they start.

That means cutting off areas where moderation is difficult, abstaining entirely from potentially problematic behaviors.

Addressing the obvious objection: this feels incredibly restrictive. We don’t like making category choices like this, especially ones that don’t carry an obvious, immediate risk of ruin.

We’re cutting off branches of the possibility tree that many people seem happy to leave on theirs. Aren’t we leaving a lot of life on the table if we behave this way?

I don’t think so. These category decisions seem draconian but end up being a source of freedom and simplicity. Meadows calls them “constraints that liberate” – the decision to remove one branch can eliminate dozens of complicated future choices.

For example, here are three sentences that could change your life immeasurably for the better:

I could keep going. The point isn’t to vampirically remove all fun from your life – I know people who would prefer to lose a toe than give up their daily glass of chardonnay – but to find and eliminate problem areas before they metastasize.

These category decisions also offer the gift of simplicity. Each one subtracts from the list of behaviors you’re measuring, managing, and worrying about.

No more back-and-forth about having a glass of wine with a friend after you said you’d start cutting back or worrying about overeating at dinner.

Eliminating branches that lead to rabbit holes – and scanning for new ones as you go – is the best way to set yourself up for a healthy, happy climb.

#3: Branches eliminated by trial and error

So far, we’ve mostly focused on the branches of the possibility tree that we shouldn’t take. We’ve cut off a few so far, and our trees are looking better for it.

At this point, a clearer view may be emerging of where to go next in our health journeys, career, or search for a partner.

That’s good news because the last part of the process is how you’ll eliminate most branches: trial and error.

How do you choose what work to pursue, who to date, and what to do with your free time? You experiment.

As you go, you’ll find things that don’t work. You might start your career in management consulting, learn you hate constant travel and vow never to build another PowerPoint slide on a plane.

With that information, you can head back to the trunk and saw off the management consulting branch. Then you can try another one – perhaps one that values the skills from your consulting job but allows you to live in one place and wear jeans to work.

There are no shortcuts here, and you’ll still try lots of things you don’t like. But the work we did in steps one and two improve your odds of success substantially – making each branch you try far more likely to be a good fit.

If you follow this process for life, you’ll arrive at old age with a sturdy tree to show for your efforts.

The only way the tree doesn’t get better is if you sit at the base, staring idly up at it.

Regardless of our starting point, we should all spend time cultivating lots of high-quality options. For most of us, that involves finding meaningful work, fulfilling hobbies, close relationships, and having a bit of money put away.

But equally important is using those options. As Meadows suggests, hoarding options is for cowards.

That doesn’t mean we have to try everything. An underrated way to use an option is to eliminate it from consideration. The ability to pass on something alluring-but-not-quite-right can be a superpower.

There’s limited risk of trying anything catastrophic in a well-pruned possibility tree. Even better, there are no bad options, making the tyranny of choice less tyrannical.

With this knowledge, exploring our possibility trees becomes fun. We can climb freely, jumping between branches as we desire, turning the once-gnarled and imposing tree into our playground.

Optionality: How to Survive and Thrive in a Volatile World by Richard Meadows (Amazon)